Here’s the next post in our story of the school roof refurbishment at the Academy in West Yorkshire. In this post, we describe the new roof membranes and how they have been installed along with the rest of the roof build up.

We’re going to show you the two roofs where the roof membranes are being replaced. These are the combined large Hall, Dining room and Kitchen Roof, part of which is pitched at 20 degrees, and the smaller Boiler Room Roof, which we showed you in the last post, where the metal deck had rotted away.  The other two roofs in this project, over two classrooms, were overlaid with a new membrane without the existing build up having to be removed. Whilst these roofs were leaking, the build up was in otherwise good condition, and therefore a more cost-effective overlay was an option.

On the boiler room roof, the metal deck had rusted away in places and therefore the first job was to repair and replace around 20% of the deck. This photograph shows the build up of the replacement roof, and it also illustrates how the roof is kept watertight as the roofing contractors work, using a “night seal”. 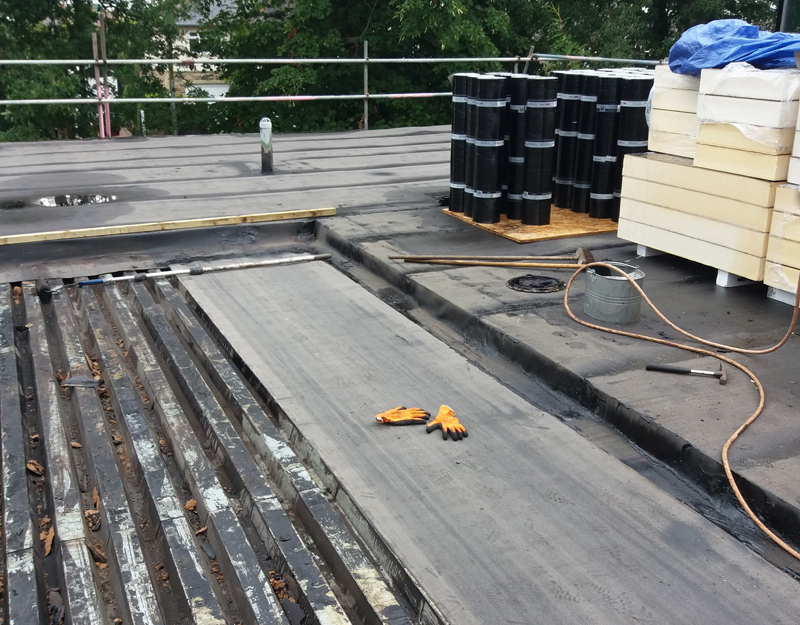 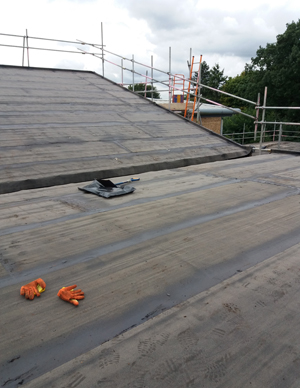 This summer has been very inclement, and there were periods of heavy rain during the project, but we’ve had no water ingress into the school. The night seal covers the exposed edge of the insulation and along with the robust Vapour Control Layer (VCL) covering all but the areas of roof being worked on, has kept the school dry during the works. It is essential for roofing contractors to make sure the works are watertight and to double check this before they leave site.

Part of the Hall roof has a steep 20-degree pitch. Here it is shown with the robust VCL installed before insulating. Because of the steep pitch of this roof, the insulation and membrane will be installed using mechanical fixings in accordance with British Standard BS8217:2005.

This will ensure that the insulation stays on the roof and doesn’t slip off, as is shown in a picture below of another roof (with a 45-degree pitch). During hot weather, if the insulation and membrane are not restrained on a sloping roof, they may begin to slump and slip off. 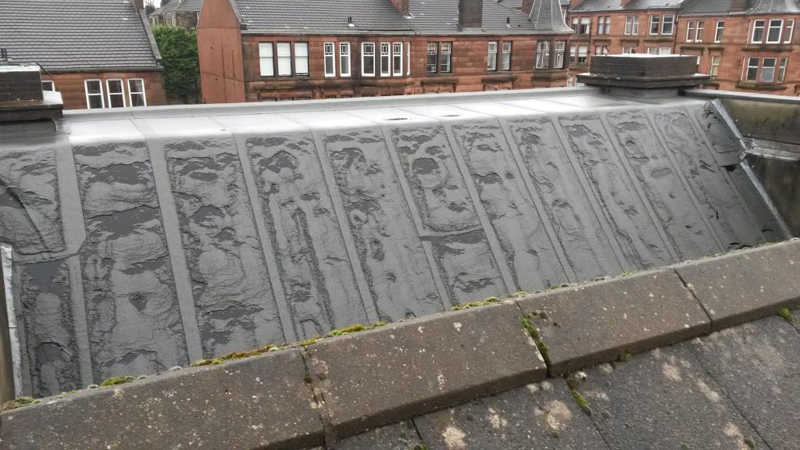 A pitched bitumen roof without mechanical fixing: the membrane is slipping off in hot weather

The metal deck on the hall roof had not rotted, even though there was considerable water ingress. This appears to be because light fittings had been fixed through the deck with screws, and the screw holes had allowed the water to drain away – into the light fittings and into the school! 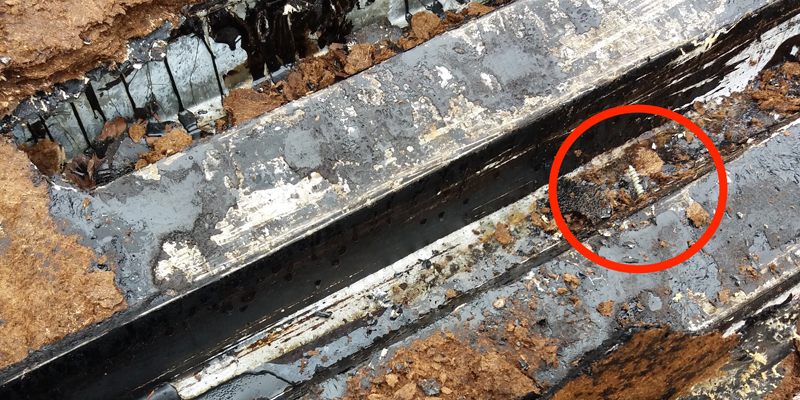 Screws for light fittings puncturing the roof deck in the hall

Using a Vapour Control Layer on a warm roof is very important because as the name suggests, it controls how much water vapour from a humid environment can travel into the roof build up. Because the roof is designed to keep the heat in, there is a difference in temperature between the inside and the outside of the roof, the temperature of the roof construction therefore drops gradually across the construction. This is known as a ‘temperature gradient’. 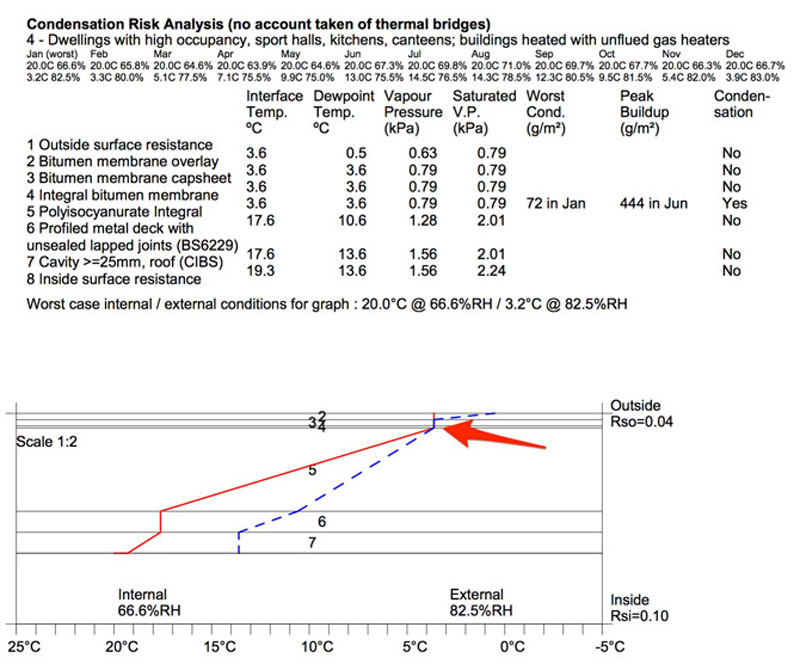 Graph showing the temperature dropping across a roof structure and the point where water vapour condenses. The calculation shows that during June 444g of water will condense out in every square metre of roof – thats 444ml!

At a point in the roof, usually within the insulation, the temperature ‘gradient’ drops sufficiently that any water vapour will get cool enough to condense into liquid water.  When the vapour condenses, it appears as water inside the roof structure, and can travel back into the building, or gather in places and cause rot or rust. This is known as Interstitial Condensation, which can then be mistaken for a leaking roof when in fact, the membrane isn’t leaking at all, and all the moisture is coming from inside the building.

Schools produce a lot of water vapour – think of all those students! Over a few months, several litres of water can condense out in a badly designed roof structure and leak back into the building. Due to the high humidity in a boiler room, there could well have been a risk of interstitial condensation in this part of the building too, so a metal lined vapour barrier should have been used on both roofs. Unfortunately, during the 1960s, 70s and even 1980s, interstitial condensation wasn’t very well understood and these precautions were often not taken.

On top of the VCL the contractors installed a SIGnature insulation system. Insulation prevents heat loss, and in this case also provides the falls or slope across the roof which allow the rain to drain off into the gutters. To meet the current Building Regulations Requirement the insulation must provide a certain level of insulation (represented by a U-value of 0.18 W/m2K) and the roof should have one in 60 falls – which means that the roof drops one metre for ever 60 metre length.

One way of creating falls across a roof using insulation is to use a ‘Cut-to-Falls System’, where each insulation board is tapered to different thicknesses to create the falls in the roof.  This can be quite expensive, though it is very convenient for the designer.

Some designers may choose a complete cut-to-falls system rather than spend a bit more of their time designing a bespoke, lower cost system. However, to keep costs down and ensure that the school gets the most roof repair for their budget, we have designed a bespoke system which is far more cost effective than a full ‘cut-to-falls’ system.

In some areas where falls exist already, have been able to use flat insulation boards and only used tapered ones where absolutely necessary, always ensuring that both the roof and the gutters meet the 1 in 60 falls requirement. Wherever possible we have also incorporated wider gutters into the insulation, which help water get off the roof faster and reduce the risk of blockages from leaves, moss etc.

The waterproofing in the roof is comprised of two elements; the SIGnature 25 Underlay and the SIGnature Cap Sheet. Both are bitumen based layers but unlike traditional felt roofing is a much more flexible and long lived material which copes with the high temperature changes produced on a well-insulated flat roof. It is very important that the membrane can withstand the heat gain on a sunny day, which is particularly high when membranes are placed over insulation, which prevents the heat from conducting away. 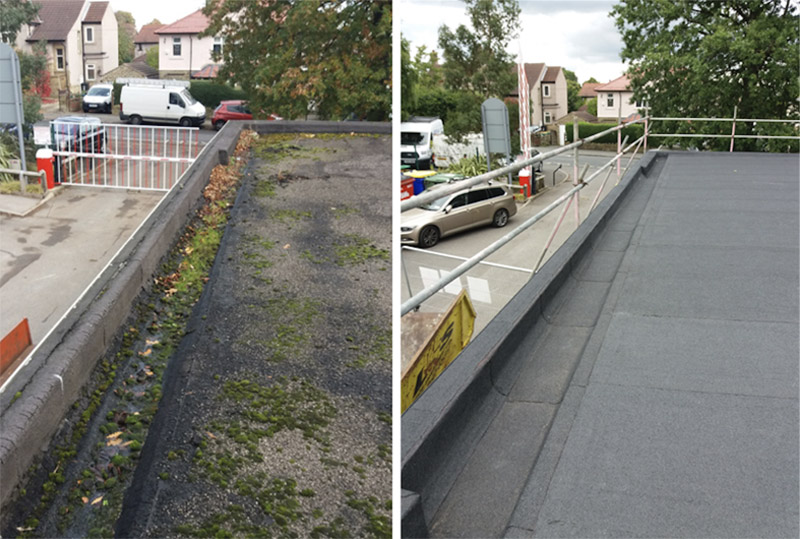 Boiler House Roof, before and after

Here are photographs of the boiler house roof, taken before and after the roof has been replaced. Both during the work and after completion the roofs are inspected by the manufacturer. This is to ensure that they don’t only look good, they actually are good. This design and the correct installation of this SIGnature system will give the Academy a 25-year guarantee on these roofs, which is issued by the manufacturer on completion of the work.

Don’t forget to sign up to receive the next instalment using the form below – and you can always ask us any questions in the comments section or via our contact page.

The next post will look at the new roofs and discuss the benefits that the roof replacement has provided.

If you’re in a similar situation at your school, why not tell us about it in the comments, and feel free to ask us any questions too.